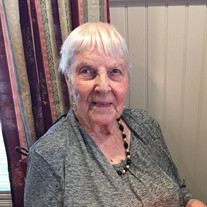 Moore, Hedi L. (96), passed away Sunday, January 27, 2019 at St Catherine’s Hospital, Smithtown. She was predeceased by her husband Frank E. Moore On April 25, 1922, Hedi (Hedwig) Luise Freiburger-Moore, was born to Friedrich Frieburger and Louise Nonnenmacher in Karlsruhe, Germany. After living through WWII as an orphan, Hedi left Germany and moved to England in 1952. After three years in Bristol, England, in 1955 she moved to America. Later that year at a New Year’s Eve party, she met her husband, Frank Everett Moore. In September 1956, Hedi and Frank married. They lived happily, enjoying their favorite past time playing golf. In 1974, Frank passed during their golf outing. In 1978, Hedi met Bud Liman L. Dunnell. Twenty years later she lost her dear friend and companion after a long illness. Hedi retired from the Gertz Department Store in Bay Shore, in 1989. Upon retirement she began volunteering at the Kings Park Senior Housing complex as an office assistant. Afterwards she started at RSVP, making calls to home bound seniors and also at APPLE, Inc. as an office assistant. During her volunteer work at Apple in 1997, she met her grandchild Glenn Jr. One day Glenn Sr. bought Glenn Jr. to his workplace. Later that morning Glenn Jr. dragged Mrs. Hedi into his office and introduced them. From that moment a bond was formed between Mrs. Hedi and the Glenns. Soon after Mrs. Hedi adopted the Terry Family and the Terry Family adopted Mrs. Hedi. Mrs. Hedi became Grandma Hedi as she began to take Glenn Jr and her little princess, Olivia on weekend outings. Those weekend outings became family outings, celebrations and vacations that lasted until she parted this Earth. In 2001, Hedi and Glenn Sr left Apple Inc. after the company was takeover by Phoenix House. While still volunteering at RSVP, Hedi also began at the Mill Pond House in St James. She volunteered for many years at both places until she could no longer drive. Hedi was recognized for her service and dedication at APPLE, Inc. and RSVP. Hedi was a kind and wonderful person. Her large smile was a reflection of the joy she brought to others. She loved to share stories of her life in Germany and her travels to America. Hedi also liked to walk the Sunken Meadow boardwalk, to shop and read. Hedi survived her older brother Walter Frieburger and her younger sister, Emmi Schmider. Hedi phoned Emmi in Germany once a week until 2016. She also leaves to mourn Emmi’s daughter Karin, and her husband Mirro, their children Leander and Chiaria Marie and her adopted family Glenn Sr., Jennifer and their children, Glenn Jr. and Olivia. Also many friends and neighbors.

The family of Hedi L. Moore created this Life Tributes page to make it easy to share your memories.

Send flowers to the Moore family.