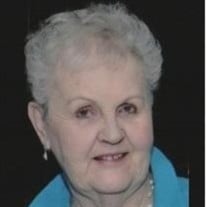 After a long illness, Josephine (Jo) Betz of Stony Brook, NY, died on Christmas Eve, December 24, 2021, at Stony Brook University Hospital. She was 86 years old. She was born in Williamsburg, Brooklyn, NY, on June 28, 1935, to Edward John and Catherine (McDaid) O’Donnell, both Irish immigrants from County Tyrone. At 16, it was decided that Jo would attend night school so she could work during the day to support her mother and siblings after her father died. She graduated from Bryant Public High School in Queens and scored high enough to start taking free classes at Hunter College in January 1953. In June 1953, she started working for General Motors (GM) on Columbus Circle in Manhattan. Jo first started in the keypunch department and eventually scored high enough on the tests to become the first woman computer operator and eventually programmer for GM. GM had a glass ceiling at the time and women could not be promoted to supervisor although she outscored all her male counterparts. They also had a formal policy where women had to quit when they had children. Jo worked there until 1961 when her first child was born. She met her husband Anthony Betz at a dance through a friend on May 22, 1954. They were married at St. Joseph’s RC Church in Astoria, NY, on October 11, 1958. They first lived in Bayside, NY, then moved to North Babylon, NY, and as their family grew, finally settled in Smithtown, NY, in 1966. She raised four children with her husband and spent 46 years of her life there until he died on January 11, 2012. She then moved to Stony Brook, NY, and spent the last decade of her life with her son and his family in their home. Her children meant everything to her, and she was the center of the family. She wanted to give them the opportunities that she did not have growing up so when they were in their teens, she went back to work. First in the computer field, and later owning a printing company with her son. She was proud of all her children and their accomplishments. Later in life, her children would spend their vacations with her in Stony Brook and called every day. Jo’s favorite day of the year was Christmas Eve and the family parties around that time. She loved the bagpipes, Scotch pies, Irish coffee, and St. Patrick’s Day. She deeply missed her friend May Winkle when she died and the family gatherings at May’s home on Yankee Lake, NY. She enjoyed her trips to Las Vegas with her husband and traveled to Alaska for her two sons’ 50th birthday. Most of all, she loved to live large and celebrate life’s events with her family. She is survived by her son, Joseph Betz and wife Jennifer of Stony Brook, daughter, Patricia Betz-Stockli and husband John of Rensselaer, NY, and identical twin sons, Edward Betz and wife Valerie of Ronkonkoma, NY, and Michael Betz and wife Lisa of Oak Point, TX; six grandchildren Jack Stockli, Victoria (Tom) Serabian, Lauren (Vik) Rao, Heather Betz, Alexander Betz, Catherine Betz, a step grandson Bryan (Mallory) Thrasher, and a step granddaughter Gianna Waldron; and two great grandchildren Ellie Serabian and Madison Rao. She was preceded in death by all her siblings: James, Isabel, Margaret, Maryann, Edward, and Cornelius. As per her wishes, she was cremated, and her ashes will be scattered in the Long Island Sound, a view of which she enjoyed every day. She gave generously to St. Jude Children’s Research Hospital for many years, although she left no giving wishes. An outdoor memorial service is planned for summer 2022 in Stony Brook.

The family of Josephine J. Betz created this Life Tributes page to make it easy to share your memories.

Send flowers to the Betz family.