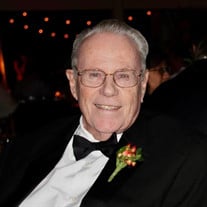 Dr. Richard Edgar Kopp, age 89, passed away peacefully in his home on November 12, 2020. He was born in Brooklyn, NY on July 12, 1931 to Edgar A. Kopp and “Nancy” Anna M. Barto. Richard graduated from the Polytechnic Institute of Brooklyn in 1953 with a Bachelors of Electrical Engineering (where he would later be an adjuct professor), a Masters of Science in Engineering in 1957, and a Doctorate of Electrical Engineering in 1960. After he graduated from college, Richard started work as a Computer Research Engineer at Grumman Aeropsace in 1953, quickly becoming the Head of Computing Sciences Group and Second Head of System Sciences. In 1984, he was the Director of System Sciences Research, and continued there until his retirement after 40 years. Richard married Elaine Hecker on June 14, 1953 surrounded by friends and family. They spent over 50 wonderful years together, many of them at their home in Smith Mountain Lake Virginia. His grandchildren have wonderful memories of going to the lake every summer and will cherish those times forever. Richard loved fishing and golf, and would take his children out on his boat when they were growing up on Long Island. He is survived by his three lovely daughters Debra (Kenny), Lisa (Ken), and Barbara (Joe). Richard will be joining his son Ricky, ‘daughter’ Lori and his beautiful wife Elaine in heaven. Richard is remembered fondly by his grandchildren; Richard (Corin), Elaine (Mike), Rachel (Jared), Ryan, Sean (Sarah), Mark (Harold), Jenny (Mike), Kaitlyn (Andrew), Rebecca and Emma. Richard’s great-grandchildren, Elliot, Aeryn, Ada and Issac, will grow up learning of his incredible accomplishments and love.

The family of Dr. Richard Edgar Kopp created this Life Tributes page to make it easy to share your memories.

Dr. Richard Edgar Kopp, age 89, passed away peacefully in his...

Send flowers to the Kopp family.