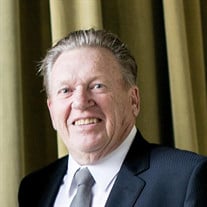 Robert (Bob) Thomas Dacey, 71, of Hauppauge, beloved husband to Marie A. Dacey for almost 48 years passed away on Tuesday, May 19, 2020 after suffering a massive stroke. Bob leaves us as a husband, father, grandfather, brother, uncle and dear friend to so many. He will be missed by all who were fortunate to know him. In addition to his wife Marie, Bob is survived by his three children and their families: son, Craig Dacey and daughter-in-law, Megan of West Islip, NY, daughter, Maria Cohen and son-in-law, Michael of Babylon, NY and daughter, Alexandra Czerwinski and son-in-law, David of West Islip, NY. Bob is also survived by his three loving grandchildren, Charlotte Cohen, Nora Dacey and Reeve Dacey. Bob also leaves behind a number of very special nieces and nephews and a very long list of friends who love him dearly. Bob was born on December 21, 1948 in Jamaica, NY, the son of the late William J. Dacey and Margaret A. Dacey. Bob grew up in North Babylon and is survived by his brothers and sisters-in-law William Dacey and Linda of East Islip, NY, John Dacey and Janice of Walton, NY, Michael Dacey and Sandy of Delhi, NY and sister Margaret (Peggy)Hague and brother-in-law, Gary of Babylon, NY, sister-in-law and brother-in-law, Claire and Joseph Persico of Smithtown, NY., and sister-in-law, Christina Buchanan-Smith of S. Kortright, NY. Bob proudly served in the US Army in the motorpool, and was stationed in Fort Collins, Colorado. After his two-year commitment, he returned to New York and he and Marie were married on July 2, 1972. Bob was hired by Harley Davidson in West Babylon, NY. and trained at their headquarters in Milwaukee. Bob loved building and repairing engines. His mechanical abilities were extraordinary - repairing things that many considered beyond repair. An opportunity to transition from motorcycles to bigger vehicles presented itself and Bob ran a trucking business for a number of years, traveling thousands of miles along the east coast. Wanting to spend more time with his growing family, in 1983 Bob was hired by the Long Island Railroad as a conductor, retiring after 20 years. During that time, Bob received endless accolades from passengers and co-workers on numerous occasions about his generous spirit and willingness to help. All through his life, Bob cherished the simple things with Marie, especially time with family at their pool at home. Extended family gatherings with big meals and an open door for all was common. Bob golfed as much as he could, locally and afar – especially enjoying the annual LIRR "Weekend at Bernie's" that he shared with his Dad for years. He enjoyed golf trips to the Carolinas and travel to new courses in California, Pennsylvania, and most recently, San Antonio, TX. He helped each of his children and their families with their own home improvements and treasured his time with his three grandchildren. We will all remember Bob for his big smile and generous spirit and he will be missed beyond measure. There will be a memorial Mass and gathering of friends and family for a celebration of Bob’s life in Spring 2021. Memorial contributions in Bob's name can be made to a GoFundMe fundraiser for Bob's Goddaughter and family: https://www.gofundme.com/f/myles-and-abram039s-fund

Robert (Bob) Thomas Dacey, 71, of Hauppauge, beloved husband to Marie A. Dacey for almost 48 years passed away on Tuesday, May 19, 2020 after suffering a massive stroke. Bob leaves us as a husband, father, grandfather, brother, uncle and dear... View Obituary & Service Information

The family of Robert Thomas Dacey created this Life Tributes page to make it easy to share your memories.

Send flowers to the Dacey family.