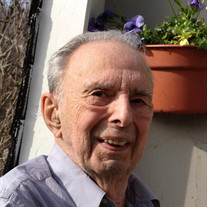 Theodore H. ‘Ted’ Muenkel of Hauppauge, beloved husband of the late Loretta (Byrnes) Muenkel for sixty years, died on Sunday, December 15, 2019. Ted died the way he lived, surrounded by loving family and friends. He is survived by his children: Theresa Christy, Tom Muenkel and wife Christine (Nick), Mary Muenkel, Ted Muenkel and wife Helene (D’Amadeo), Joe Muenkel and wife Kathy (Campagnolo), and Christine Weisz and husband Carey; his grandchildren: Kerri and husband Bryce, Kevin, Joseph, Samantha, Eric, Nicholas, and Katelin; his brother Edward Muenkel and wife Mary; numerous nieces and nephews; and close friends. He was predeceased by his son-in-law, Steven Christy. Ted grew up in Hollis, NY, graduated from Bishop Loughlin High School in 1947 and then served in the U.S. Army. After his honorable discharge he started a career with Pitney Bowes, Inc., retiring after 40 years with the company. Ted had strong mechanical skills and loved being “Mr. Fixit”. Whether on the job, working in his home, on his cars, or helping others with their broken gadgets, he got great satisfaction from diagnosing and correcting problems or teaching others to do the same. Ted also had an affinity for numbers, a methodical approach to solving all sorts of puzzles - especially jigsaw puzzles, and an engaging sense of humor. He loved to make people laugh, typically by telling jokes, and his motto was “If I made someone smile today, I’m happy”. After his retirement Ted embarked on a long-anticipated quest – to ride his bicycle on every paved street in Nassau and Suffolk Counties. He kept careful color-coded maps to record his progress, and we are proud to share that he did indeed ride at least 90% of those streets. Ted was a loving family man of strong faith. His colleagues captured him perfectly when they engraved his gift watch with “A Good Guy”. His family and friends miss his physical presence but carry him in our hearts. We trust he is with the Lord in a place of joy. Calling hours will be held at Fives Smithtown Funeral Home on Sunday, December 22 from 2-4 pm and 7-9 pm. There will be a Mass of Christian Burial at St. Thomas More Church, Hauppauge on Monday, December 23 at 9:45 am followed by burial at St. Charles Cemetery, Farmingdale. If you would like to make a donation in memory of Ted, please consider a cause close to his heart, the Juvenile Diabetes Research Fund, and say a prayer for a cure. The website is www.jdrf.org; address is JDRF, 200 Vesey Street, 28th Floor, New York, NY 10281.

The family of Theodore H. Muenkel created this Life Tributes page to make it easy to share your memories.

Theodore H. ‘Ted’ Muenkel of Hauppauge, beloved husband of the...

Send flowers to the Muenkel family.