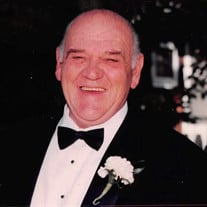 William Thomas Rigby of Blue Point, NY passed away peacefully on Thursday, October 8, 2020. Bill is predeceased by his beloved wife Joan, his adored son and daughter, Guy and Julia Ellen (Lally), and his beloved sisters June Rigby Baas and Carol Rigby Lee. He is survived by his adored grandchildren Katie, Jonathan, and Jenna, and his beloved great-grandson Declan. Born on May 20, 1934 to William and Loretta Rigby, Bill grew up in Bellmore, NY, where he met some of his lifelong friends, many of whom moved with their families to the Bayport, Blue Point, and Sayville area in the early 1960s. Bill and his friends were known for their pranks and great sense of humor, and they appropriately named their group The Jokers. Along with many of his friends, Bill joined the Navy after high school, and honorably served his country in Korea. Bill was a highly skilled carpenter, and had a successful construction business for many years prior to retiring. A man of steadfast faith, Bill was a longtime member of Our Lady of the Snow Roman Catholic Church, where he and his wife Joan served as Eucharistic ministers. Bill was a good neighbor and a good friend to many. His immense laugh and generosity will be missed. A memorial service will be held at Fives Funeral Home 326 East Main Street, Patchogue, on Sunday, October 11, 2020 from 2pm-6pm. A funeral Mass will be held at Our Lady of the Snow R.C. Church in Blue Point, on Monday October 12, 2020 at 11 am, followed by interment at Calverton National Cemetery. In lieu of flowers, contributions may be made to: Mercy Center Ministries, 436 West Main Street, Patchogue, New York 11772, and would be greatly appreciated.

The family of William Thomas Rigby created this Life Tributes page to make it easy to share your memories.

Send flowers to the Rigby family.